Hockey fever is in the air and the big event is about to begin! As thousands of fans from Marquette County look on, firefighters and law enforcement officers face off against each other, hoping to win this year’s Pigs-N-Heat game. Although the game is great fun for fans and players alike, there is a more serious side to this ice hockey game.

It has been 34 years already and the following is a brief history of what the Pigs-N-Heat organization is all about. It first began when Marquette City Police Officer Larry Grimsby, Michigan State Trooper Dave Rotteman, and Marquette City Firefighter Dan Dagenais wanted to raise money to assist a family with three young children whose home had just been lost to a fire. Since Marquette is home to the Northern Michigan University Wildcats (NCAA Division 1 hockey team), and a huge hockey community, a benefit hockey game seemed to be the best choice to help raise money for the victims of the fire. The first Pigs vs. Heat charity hockey game drew in 500 people and raised $1,700.00.

Today, the Pigs-N-Heat Charity hockey game draws between 2,500–3,000 people and raises approximately $15,000 to $20,000. In 2013, the charity hockey game raised over $15,000. Over the past 33 years, the Pigs-N-Heat Fire Relief Fund has generated approximately $440,000.00 with more than $395,000.00 being distributed to Marquette County families who suffered losses due to fire. We provide a monetary donation based on the family size along with three nights of lodging at a local motel to help the family start over. The winter of 2013-2014 was very busy for many fire departments battling the extreme cold and snowy conditions. We never know who or where the next victims might be when their home and contents are destroyed by fire.

Although police and fire department support has been great, it is the overwhelming community support and participation that make the Pigs-N-Heat Fire Relief Fund Hockey game so successful.

For additional information about this please call or email Brian Olson, President Pigs-n-Heat at 869-6446 or by emailing here. 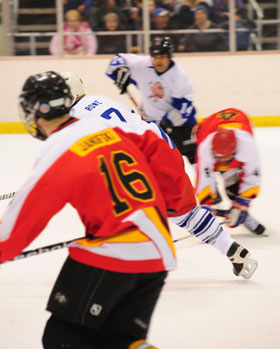